In my previous blog I wrote about my use of google apps for education and its powerful applications in terms of students collaboration and monitoring of workflow. Today I would like to mention some other web 2.0 tools that will be useful to use in Science teaching as well as teaching in general. I read with interest an article by Groff & Haas (2008) that made mention of ‘Starlogo: The Next Generation (Starlogo TNG) developed by MIT. It allows students to program games and simulations demonstrating such concepts as evolution, forest fires etc. These are concepts difficult to experience as they are either too long a time frame or to large an area to all be observed. I have not used this program myself but am sure it is also useful in other areas not possible by direct human observation such as radioactive decay (too small/too short or long a time frame).

I also liked how Groff & Haas (2008) also discussed ‘bumps in the road’. Although I believe most schools need to think more strategically on how to support teachers in the implementation of ICT I also think teachers need to expect not all will be smooth sailing and to persevere as well. If an educator has some expectation that there will be challenges then they are more likely to stick with it to the end. It is important to think ahead and predict what issues may arise and possible solutions to the issues. The more experience one has with the implementation of ICT into the teaching and learning process the easier this becomes. It is also important to have a backup strategy as well just in case; what if the power goes out! It does not mean that teaching and learning cannot happen.

This does not let schools and leaders off the hook however, as Luckin, Clark, Graber, Logan, Mee, and Oliver argue, teacher need the willingness to take the risk to change their practices from more teacher centred to more student centred in their use of web 2.0 tools but schools, leaders and parents need to support teachers in taking the risk. A paradigm shift is always hard but as I know from the history of Science, a paradigm shift can be very important. This is a shift from the teacher being the director to the facilitator of learning. None of this is new as such shifts have been discussed before web 1.0 let alone web 2.0 existed, however in the utilisation of web 2.0 for learning it is more important than ever. The appropriate use of ICT strategies and web 2.0 tools in education is most certainly not an easy out for the teacher.

In deciding what tools are best for a particular lesson and subject using a model such as TPACK is very useful. 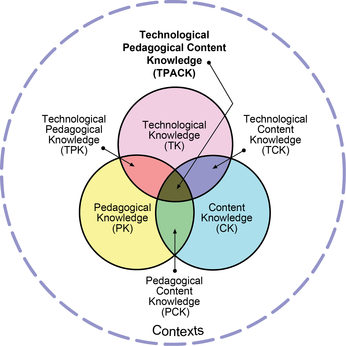 It is important to not just use a ICT or web 2.0 tool just because it is the latest fad or for the sake of using it. If sound pedagogical reasons are used in decided what and how to use it it is more likely to be successful and used again. Gouseti, A. (2010) makes an excellent point that in the rush to implement the next new thing the previous technology does not have a chance to be used effectively. It is important to use less well for a longer period of time than to use more with little effect over a shorter period of time. Gouseti goes on to argue that digital technologies have promised much but delivered little and the above reason is one of a number of reasons for this.

I have chosen to use Google apps for education over the last year well, and although there are other web 2.0 tools I have used as well, Google apps has been my focus. The reason is I want to become proficient in its use and would rather do that well than spread myself thin in learning too many things at once. I have found the collaborative nature of Google apps to be very beneficial for students and the ability to track students contributions very beneficial for teacher management of my classes work. Also administration and distribution has been made easy through the use of scripts such as ‘doctopus’ (to assign documents and sharing permissions) and ‘flubaroo’ (to mark google forms quizes). Google classroom is making the administration and distribution even easier. If a school can afford ‘Hapara teacher dashboard’ all of this becomes even easier to manage again.

The next thing I would like to utilise more with students are blogs and wikis. The challenge is to get students to engage at a deeper level with them. As Gouseti states, students tend to be consumers of blogs and wikis rather than active producers of it. One way to get students to engage in it more could be to assign grades to it. For the less intrinsically motivated assigning marks to A TASK MAKES IT MORE IMPORTANT TO THEM.

Luckin, Clark, Graber, Logan, Mee, and Oliver add statistical proof to the lacklustre application of student use of web 2.0 tools. Out of 2611 year 8 and 10 students only 2 had edited a wiki with one of them doing it as a joke! So much for ‘digital Natives’!!

In fact the research conducted by Luckin, Clark, Graber, Logan, Mee, and Oliver reveals how vital the role of the teacher is in student use of web 2.0 tools. In their interviews of students many said the educational sites they used were the ones suggested by their teachers. The research discussion then goes on to say that learners (the so called digital natives) using web 2.0 tools for learning at higher levels of sophistication need scaffolding from a more able partner, such as a teacher. This brings to mind Vygotsky’s Zone of Proximal development. 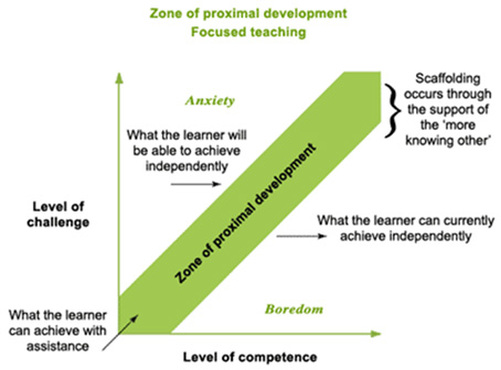 The educational and pedagogical theories underpinning the appropriate use of web 2.0 tools are largely not new even if the tools used to appropriate the theories in classroom practice are.